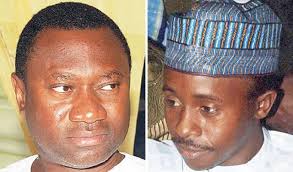 There are reports that the Inspector General of Police has received the video tape evidence of the bribery incident involving Farouk Lawan and Femi Otedola. The reports further stated that the tape was handed over to the IGP by the SSS, but there are concerns that the Presidency may have backed down on its earlier resolve to follow the matter up to logical conclusion, following pressure from a section of the House of Assembly and some Northern leaders. The allegations that report by the committee led by Farouk Lawan was being rubbished by the Presidency have also resurfaced.
Posted by Wale Akala at 01:15
Email ThisBlogThis!Share to TwitterShare to FacebookShare to Pinterest